RV Geo Resolution, a hydrographic survey vessel owned by Hong Kong base EGS Survey, will leave Sydney’s Glebe Island wharf in the next few days to commence surveying the seabed between Australia and the US in search of the optimal route for Southern Cross Cable’s new submarine cable, Next.

The cable announced in September 2016 and is scheduled for completion in late 2018 or early 2019.

The 68 metre, 1913 tonne diesel electric-powered Geo Resolution started life in 1989 as the US Navy’s Tenacious tracking Soviet submarines and after a stint as a New Zealand Navy hydrographic survey vessel was bought by EGS and converted for submarine cable route surveying in 2014.

Graham Evans, managing director of EGS’s Global Subsea Cable Business, said the ship’s history made it ideal for its current role. “It’s very quiet so there is minimal interference with our survey equipment,” he explained.

Geo Resolution will use a range of technologies to determine the optimal route for the cable, the type of cable needed for different portions of the route and the nature of the seabed for portions of the route where the cable must be buried to avoid damage by fishing activities and anchors – generally at depths of less than 1,500 metres.

The ship will also be looking to avoid steep seabed gradients, seamounts, volcanoes of fracture zones while aiming to find the shortest route to the US West Coast, via Fiji and Hawaii. Southern Cross is promising that it will be “the lowest latency path to the United States by some considerable margin.”

Near shore portions of the cable are protected with a double layer of steel wire armour; those portions in deep water use only a plastic outer sheath unless there is danger of abrasion.

The cable will also have about 200 optical repeaters to boost the signal on its 12,500km journey and the survey will also determine optimal locations for these. The cable must cross the 11km deep Tonga Trench, the second deepest point of the world’s oceans after the Mariana Trench and well beyond the depth at which the repeaters are designed to operate.

The GEO Resolution will use echo sounders to determine the water depth accurately and side scan sonar – a device towed about 30 metres above the seabed that sends out acoustic pulses which are reflected from the seabed and picked up by hydrophones (sub-sea microphones) — to generate a contour map of the seabed on either side of the ship’s route. 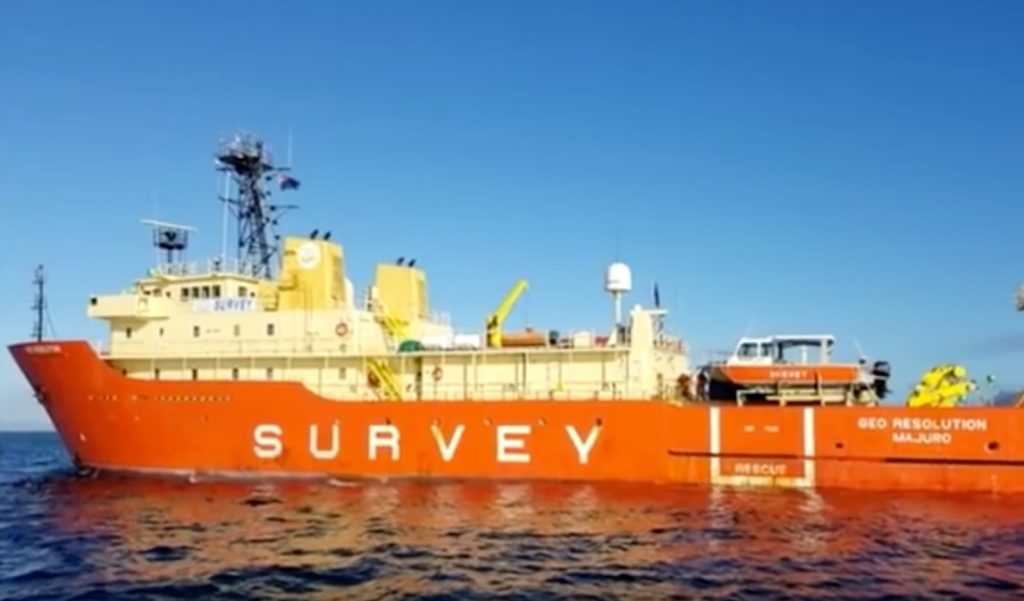 The system also gives an indication of the nature of the seabed: the signals penetrate the surface and are reflected back to a greater or lesser degree depending the composition of the seabed.

For areas where the cable must be buried the ship uses two techniques to asses the composition of the seabed: a device to take samples of the seabed material and a cone penetrometer: A three metre long tube lowered to the seabed with a cone inside it is allowed to freefall to the seabed. The resistance offered by the seabed to the cone is measured.

The vessel will have an onboard survey team of 14 made up of geophysicists, IT engineers, electronics engineers, CAD engineers, cartographers and cable route engineers. All the survey data gathered will be processed on board with the aim of providing on a daily basis the data needed to enable the cable manufacturer to produce the correct type and quantity of cable needed for each section of the route.

Evans said this ‘just in time’ approach was needed to meet the scheduled in-service date of early 2019, driven by rapidly rising demand for capacity.Southern Cross signed the contract for the survey at the PTC conference in Hawaii in mid January. The survey is expected to take 140 days to complete – weather permitting.